It is Wednesday morning, just after 9am, and I am lying in bed somewhere deep in the guts of the long school summer holidays. I am staring at the ceiling and regretting making some pretty unrealistic promises to the kids about taking them somewhere fun and exciting.

The word, ‘Dad’ wafted angrily up the stairs. I allowed a few more dads to float up before I screamed: “What?!…What?!…WHAT?!”

“Where are we going today?” My daughter’s voice was full of hope and excitement.

“How about the farm? You remember the farm. You can feed the animals,” I shouted back down the stairs.

“What?!” There was a pause. “Not the…FARM!” Her voice embalmed in grief.

My daughter is only five years old, but old enough to know that the farm is lame. On the other hand, if you mention the farm to my eleven-year-old son, it sends him into fits of uncontrollable rage.

“The FARM!” shrieked my son. “We are not going to the farm!” This was followed by footsteps; angry footsteps heading my way.

My son appeared at the door in his dressing gown, wearing the microphone headset that he uses for his Xbox Live games. He looked like a psychotic call centre worker.

“I told you I didn’t want to go to the farm,” he said, dropping his shoulders and looking down at the floorboards in mock sorrow.

“You didn’t,” I replied, and he flapped around in circles. At this point, my daughter burst onto the scene and mimicked her brother. They were both parading around the room, much like high-speed wind-up toys, repeating fragments of the previous exchange under their breath, such as: ‘farm’ and ‘didn’t want to go’ and ‘dad is so boring’.

“Aaaagh.” they both screamed, and stomped out.

One hour later I pulled the craft things out of the craft box, and what seemed like the entire contents of a 6th form art cupboard toppled out. I knelt down to pick it up, but quickly realised that it was such a catastrophic spillage, that scooping and shoving back in would not remedy the situation; so I left it.

“Are we really doing this?” asked my son, pointing at the craft items displayed on the table and the floor. His tone was more conciliatory than before; he sounded almost pleasant.

He let out a heavy sigh, which he followed up with some intense arm flapping, and finished the routine off with an awesome display of chin on chest resignation. He reminded me of a fat pigeon trying to take off.

Basically, I’ve taken a precious chunk out of my holiday entitlement to see my kids perform meltdowns in different rooms. It’s tempting, at times like these, to mentally leave your body and go to a happy place, but this should only be used in the direst of circumstances, where all hope is lost. Over the past few years, I’ve found it more comforting to think that I’m a guard in a mental asylum. A technique that can also be used in the work place.

Ten minutes later I finally got my wish. We were all sat around the big table, crap all over the floor, with reams of blank paper stacked before us; perfect. I looked at my kids, who were rooting through a plastic tub full of felt tip pens, drawing a dry, squeaky line and sighing: ‘doesn’t work,’ before tossing them back into the tub. The actions took on a universal rhythm: Squeak, squeak, ‘who left the top off?’ Squeak, squeak ‘it wasn’t me’. Squeak, squeak ‘yes it was; I saw you’.

The door opened and my wife walked in. She looked at the arguing kids, the sea of crap on the floor and then at me, before she plonked her hands on her hips in disgust. I looked down at the mess on the floor and I saw a fresh ink spill in the corner of the room, and I drifted off to a happy place.

This is my son’s drawing. It is four happy knobs attacking each other. 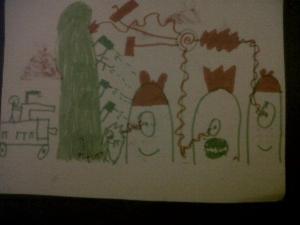 4 thoughts on “I’ve taken a precious chunk out of my holiday entitlement to watch my kids perform meltdowns in different rooms.”